We recently started a new academic year—a new beginning, a chance to start out fresh. As I thought about fresh starts in the art community for my very first blog post, the Whitney Museum of American Art immediately came to my mind. The museum opened the doors to its new home in the Meatpacking District after moving from its original location on the Upper East Side three months ago. What I remember most about the opening buzz is how eager the fashion community was to welcome the museum into the neighborhood; Bloomingdale’s even celebrated the opening with window displays and special-edition shopping bags. Max Mara took the fête to another level and not only hosted the opening party, but also collaborated with Renzo Piano, the museum’s architect, to create a new bag inspired by the building’s structural design. Intrigued by the fashion community’s excitement, I added a trip to see the new building and its inaugural exhibit, “America Is Hard to See”, to my summer bucket list. 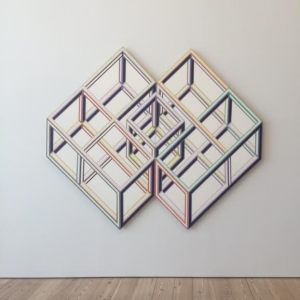 I finally had a chance to visit the museum last weekend, and I now understand why the architecture, along with the art that it houses, inspired the creative endeavors mentioned previously. As I stepped into the freight elevator, I was amazed at how quickly I became impressed with the new museum, before I even had the chance to see any art. (I found further validation for my admiration when I discovered that First Lady Michelle Obama shared similar sentiments.) I was also intrigued by the little details throughout the building, like the lights of Félix González-Torres’s “Untitled (America)” (1994) in the stairwells. However, my favorite part of the new building was the outdoor terraces, which flaunt an impressive view of the New York City skyline. After about an hour of admiring the building’s design, I finally switched my audio guide on and walked through the inaugural exhibit.

The museum’s fundamental task is working out what qualifies as “American art,” as Dana Miller, curator of the Whitney’s permanent collections, has indicated. Keeping this mission in mind, I thought that the idea for its inaugural exhibit, “America Is Hard to See”, was particularly fitting. The exhibit aims to reevaluate the history of American art. Curators have labeled the places of birth and death of various artists, inviting viewers to reflect on what it means to be American. Although I am by no means an art connoisseur, I thought the exhibit was very interesting and thought-provoking. The most fascinating aspect of the exhibit was how first generation Americans evoked American themes in their works of art. 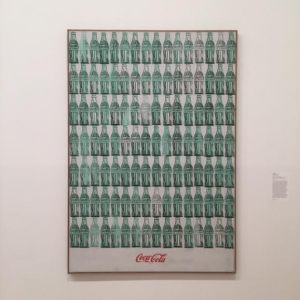 “America Is Hard to See” will be on view until September 27th. I highly recommend planning a day trip and experiencing everything that the museum and its new neighborhood have to offer—make a reservation at Untitled for brunch, check out the exhibit, and enjoy the outdoor terraces before it gets too cold.

This entry was posted in 2015, Fall and tagged america is hard to see, whitney museum of american art.